February saw some big battles when it came to brands going through crises. For starters, the on-going fight between Apple and the FBI ramped up.

The tech industry gets behind Apple

Investigators want Apple to create software that would, in effect, hack its own phone, but Apple has refused to do so, and been backed up by several other major tech names (such as Google, Microsoft, Facebook and Twitter ). Now the fight is set to go to Congress.

So far, the bad and good publicity seems to be fairly evenly spread between the two organisations, with some people supporting Apple’s principled stand for its customer’s privacy, while others are lambasting it for failing to help with a major national security issue. This is a battle of principles versus pragmatism, and it’s unclear as to which organisation will come out on top.

On 23rd February Mars had to recall all of its Mars and Snickers products in Germany after bits of plastic were found in one item. Later that day, it expanded the recall to 55 countries and identified one of its Dutch factories as the source of the problem. It also confirmed that the recall had been called in response to a consumer returning a chocolate bar on 8th January.

The Grocer pointed out that Mars was slow to release information on its social media channels, but that it could be excused for having more things on its mind than updating a Facebook page during a crisis. It went on to say:

“But that’s exactly why communications experts stress the importance of thing of such seemingly small details well in advance of any crisis – you have to plan for how you pass on messages to the front line quickly and effectively, especially if you are dealing with multiple countries.”

Perhaps it’s understandable for small businesses to have trouble staffing social media during a crisis, but Mars is a major international organisation, and it should have had teams prepared to prioritise social media communications. Perhaps the lack of information on social channels was one of the reasons why the Mars website crashed as people tried to find out more.

February also saw review site Yelp hoisted on its own petard (somewhat) as a disgruntled employee posted an open letter to the CEO after tweeting him several times with no response.

The employee described how she was struggling to afford food while working at Yelp. It wouldn’t let her switch jobs from the customer service team to something more aligned with her goals (until she’d been there a year). She also lamented at how expensive it was to rent in San Francisco (none of her colleagues could room with her because they were all living from home themselves).

The letter divided opinion. Some thought Yelp was a heartless megacorp, while others regarded the letter writer as entitled and unrealistic in her ideas of what her first job out of college would be like.

Yelp fired her pretty swiftly – although the CEO said it had nothing to do with the open letter.

Talia soon found herself under attack by internet commentators and major news sites, while some people started to speak out in favour of Yelp.

Yelp faced another problem going into March, as a single mother posted her own open letter saying that she was fired from Yelp when her boyfriend had a serious accident and she needed some time off. Outraged, people started tweeting about the issue using #YelpCares.

Yelp responded to the latest social media storm by pinning the following tweet to the top of its timeline: 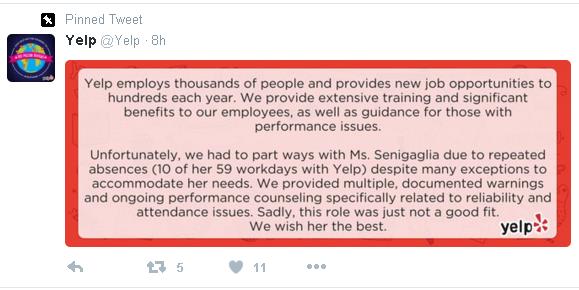 While Yelp is clearly trying to restore its reputation as a caring employer, being so open about the performance issues of an ex-employee who is obviously vulnerable isn’t very empathetic, and is not likely to win people’s sympathy.

A brand depends on clear communication and its bank of good will during a crisis. Without either of these the crisis is likely to last longer, and have a bigger impact, than it would otherwise.

Gemma Storey
Gemma is Polpeo’s Content Specialist. She develops the crisis storylines and writes social content for Polpeo. She is the principal voice of Polpeo on Twitter, and blogs on PR Examples and carrotcomms.co.uk/blog.
Previous Post
Responding to data breaches: how has TalkTalk done?
Next Post
Brands in crisis: controlling the risk

Why crisis planning is vital

How brands can safeguard their reputation in a post-truth era