The subtitle to this post should be: “in a way that doesn’t blow up in your face”.

No reasonable person expects brands to be perfect.

Mistakes happen, it’s the response (or lack of one) that counts.

But sometimes businesses seem to feel like any negative feedback is an attack on themselves and their business.

They seem to think that somewhere out there, a small army of bitter people with too much time on their hands are busy trying to destroy everything they’ve accomplished. When really, all most of them want to do is leave honest feedback (okay, so there may be some spleen venting going on too).

The phrase “negative reviews” is designed to get us defensive. It says: “I am about to list the many ways in which you, sir, are rubbish”.

Critical feedback is an opportunity. A critical post allows the business owner, or a brand’s customer service team, to find out what isn’t working and improve its services.

It also gives the business a chance to demonstrate its speed of response and ability to empathise; and its willingness to acknowledge mistakes and make it up to the customer.

Even when the criticism is unfounded, critical feedback lets businesses show that they stand by their product or their employees (by politely correcting a customer when they’re wrong).

If you think about how many times we use a service or buy a product and don’t leave any sort of feedback, the fact that someone has taken the time out of their day to leave a comment about the service they received is important. It shows that (on some level) they care enough about their experience to spend more time talking about it. In choosing to write a review, they’re providing an opening for further dialogue.

How businesses have dealt with negative reviews

Apologise and fix the problem

This tweet from 2015 shows how brilliant JetBlue can be at customer service. When a passenger tweeted about his TV being broken during his flight, the airline replied quickly, showing sympathy, apologising and asking him to DM them his details so that they could offer him a something to make amends.

A fast response, combined with empathy and action, shows the customer that they’re valued. It also shows anyone else that might be watching that JetBlue is a brand that cares about its customers. 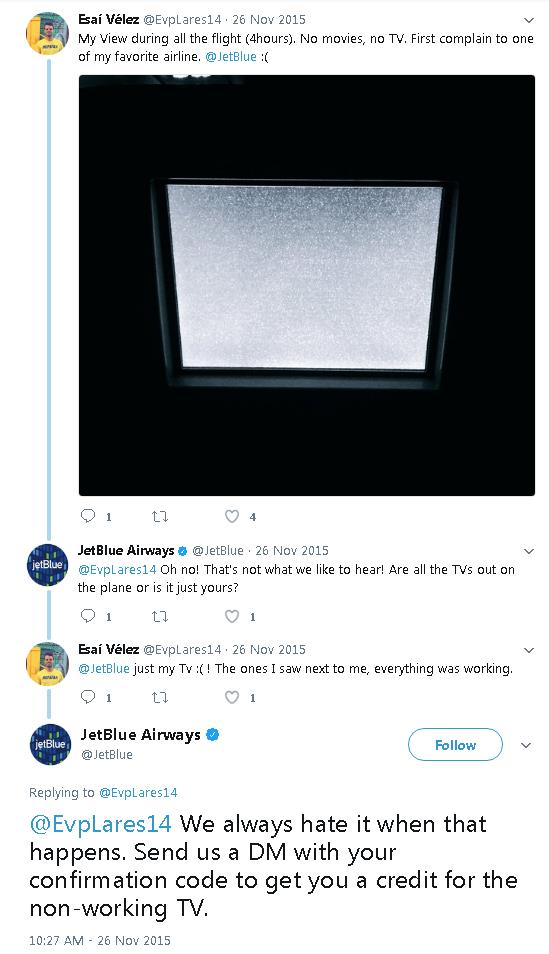 Businesses don’t need to apologise to people if they have nothing to apologise for. When a customer of Bennett’s Café & Bistro in York asked for hot water and a slice of lemon, she was peeved to be charged £2 for it and took to TripAdvisor to leave a negative review.

Rather than get angry, or apologise, the owner responded to the review by laying out exactly how much it cost to make the drink, from paying a decent wage to the person who served her, to other overheads. The response even got picked up by restaurant critic, Jay Rayner, who agreed with the owner. It got covered in the national media.

Most people understand that not all negative reviews are reasonable complaints, and you often find people coming out to support the business when this happens.

When one Californian lady posted a scathing review of her stay at the Hotel Doolin in County Clare, Ireland, she may not have been fully prepared for the response.

The manager’s response, which seems to have vanished from the site, clarified that the receptionist had made a mistake, but that it was spotted and corrected that evening and the customer compensated a little extra. The rest of the response included such gems as:

“From the title of your review, other readers would think that you inadvertently stumbled into Hitchcock’s Jamaica Inn and that Hotel Doolin was full of brigands and cutthroats, that our staff wear eye patches and pantaloons and are hiding behind the pillars in the lobby, cutlass clenched between our teeth, waiting to jump out and pillage passerbys.”

“I’m sensing a lot of anger in the review above and I know that you probably didn’t mean to let loose all that anger on us. Hey, sometimes people just need to vent. Sometimes at night when I come home from a long day’s work at the hotel, I check to see if everyone is in bed and then I go out into the field at the back of my house and scream into the darkness. I let it all out, like a wolf on a moonlit mountain. I feel better after that and nobody gets hurt. I’m not saying howling into the night like a wolf will work for you, I don’t know your circumstances, you may have neighbours that’ll think it is weird, but there are other ways of channelling rage that don’t have to involve Hotel Doolin and slandering Emma.”

But, what about the WiFi, you ask…

“With regards the Wi-Fi, yes, the Wi-Fi in the west of Ireland is the worst in Europe, there is nothing we can do about this for the moment, although I think we are getting high-speed broadband in the area pretty soon. in the meantime, to anybody else reading this review. DO NOT COME TO DOOLIN IF WI-FI IS MORE IMPORTANT TO YOU THAN HUMAN INTERACTION, YOU WILL BE DISAPOINTED.”

Then it gets bloody…

“There are three men over the age of forty working in the hotel. Only one of them was working on the night you stayed, so we didn’t know how to deal with the ‘grumpy old men’ in your review, until my assistant manager came up with the only viable solution. We’ve decided to execute all three of these men to ensure that no other guests will have to endure the horrific ordeal you went through that evening in the bar. Paul, Martin and Luis will be blindfolded and shot in the back of the head at Fitz’s cross after mass this Sunday.”

“You see, even though you hurt us deeply with your review, we’d still like to be friends, we’d love if you afforded us the opportunity to change your opinion of us and hope that you will return to Doolin someday. In fact, each year on the 30th February we have a party for our valued past customers who think we are liars, we all hold hands and dance around a campfire and sing songs that help us forget about the past and look with hope towards the future.”

The humour and personality used in the response got the hotel a lot of positive attention on social media. Sometimes we like someone to bite back.

When one former Masterchef finalist opened his new restaurant, he may not have been completely prepared for the perils of TripAdvisor. When one customer complained about the cost, and taste, of the food and drink.

The owner responded by first admitting that despite being told not to take these reviews personally, he did and then by talking about each point made.

While there was no apology, he explained what he was doing to improve things (also saying that the place has only been open for 4 weeks compared to the years that the other great local restaurants that the customer was comparing them to, had been running).

His response is very personal and very human.

Then there are the business owners who get so angry about a negative review that their response takes one person’s opinion and turns it into a reputational crisis.

One woman left a 2-star review on Google after her scantily-clad toddler filled visit to an American vegan café.

That would probably have been the end of it, the story is so outrageous that a lot of people wouldn’t have taken it seriously.

But then the owner/parent took to the restaurant’s Facebook page to complain about the customer’s attitude – calling everyone’s attention to the review still attached to their Google results. 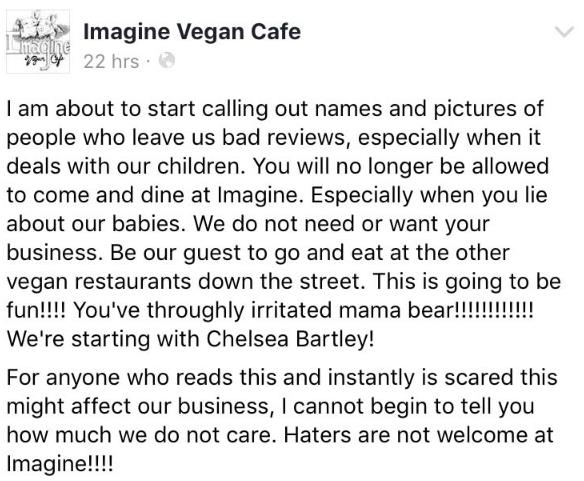 They continued to debate the matter with people on their Facebook page, before temporarily taking their social media accounts offline. 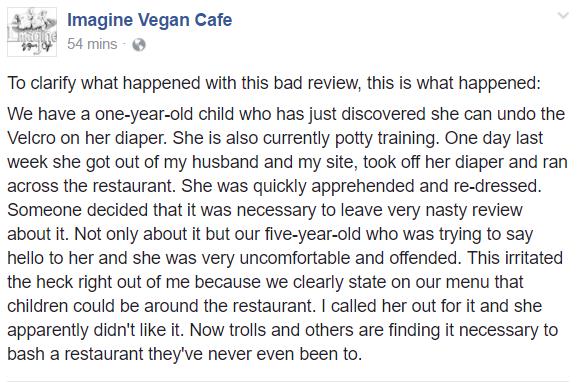 In one post, the owner even asked why a customer didn’t grab the naked toddler off the table if they were on there, prompting a Facebook user to reply:

“I’m certainly not gunna touch somebody’s naked baby…too much of a liability. Geeze you just recommended randos grabbing your naked baby off a table. Dumbfounded.”

Negative reviews are only really negative if you frame them that way. Instead, a review can be constructive or something that is genuinely fake and malicious. Most people take negative reviews with a grain of salt anyway, especially if the author of it seems a tad highly strung.

If handled the right way, a genuine but critical review can end up benefiting the business by showing that it’s willing to listen to criticism and improve the products and services it offers.

Gemma Storey
Gemma is Polpeo’s Content Specialist. She develops the crisis storylines and writes social content for Polpeo. She is the principal voice of Polpeo on Twitter, and blogs on PR Examples and carrotcomms.co.uk/blog.
Previous Post
Why brands need to simulate a social media crisis
Next Post
Is your brand prepared to be attacked on social media?